So I’m currently fighting off a targeted DDOS attack that have been on and off for the last month! We run a gaming server. Unfortunately, the gaming software we utilize limits us to only use the server IP address for inbound traffic and therefore, we can’t use any EDGE solutions to distribute inbound traffic.

Initially, the DDOS attacks all came from a specific number of PORTS likely compromised IOT devices. However, we successfully blocked those and stopped the attacks for a few days. Now they are back using what we believe to be UDP reflection attacks with 46+ million unique IP addresses targeting all ports.

We have a powerful firewall (on AWS), which can handle the traffic. However, about 80% of the bad traffic still passes through to our backend server, as we can’t catch it. Although we had good success with 1 rule from this forum mentioned below, that reduced it to about 20% getting through)

What’s making this difficult is the LOW volume of packets/bytes. I have some questions, and I’ll also provide some specifics of the issue if anyone can assist!

We had some good (40-70% Drop Rate) but not enough success when adding the below rule from this site:

My questions are as follows:

If step 1 is not completed, it won’t allow UDP traffic for this user?

I know I’ve asked a lot! And also I’m happy if someone is interested to work on this project with me, so you can reach out also.

Here is an Image showing the breakdown, it’s for 10K IPs but it’s likely the same for the 46 million. 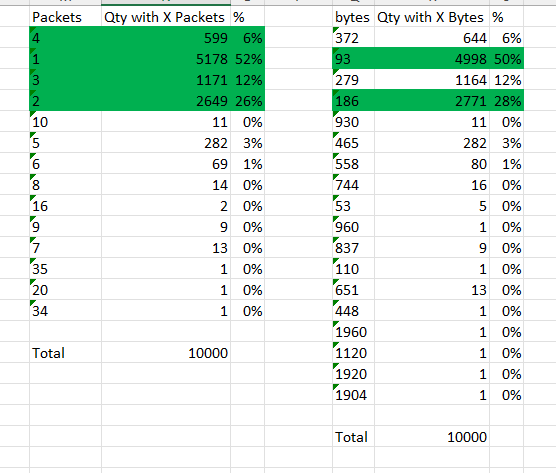 These two ideas require at least two rules, one to set the xbit an the other to check and act.

Have you looked for any pattern in that DDOS traffic attack?

Yes, I captured the latest packets last night, as there were several hours of no-doss activity. This is their latest attack type as we’ve blocked the others!

I also checked out our normal traffic, and we don’t get any 107-byte UDP or QUIC packets (not that we use QUIC).

So an easier solution to DROP these might just be to Drop any UDP packets with a size of 107 bytes. How would we go about writing that?

Regarding this, Xbit approach. Would it work with an AWS Firewall using Suricata 6.X? As there are restrictions on any kind of accessing lookup files (such as geo filters).

I’m not sure if what you mentioned would be practical, as 95% of the time IPs are unique and therefore only hit us once (but when there’s 46 million it makes an impact. BTW: we analyzed the packets and determined them to be QUIC packets that use the UDP protocol (apparently quite famous for IP spoofing).

We will also be looking to understand better the user journey in terms of TCP>UDP>TCP as we haven’t fully captured that yet.

Here is a packet for reference! 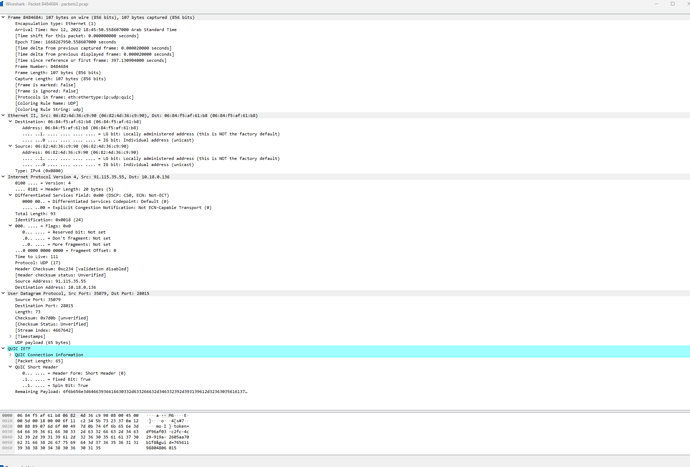 Give it a try with Quic and dsize rules.

Xbits are not restricted per aws docs, however in my experience while developing integration with the aws network firewall, not everything in documented.

If the ips hits you only once, this would be a bit difficult without other criteria.

Fyi: UDP is the only way possibly to spoof IPs with since they do not require 3-way handshakes as in tcp.